In preparation for 2012, NASA gives us 1235 alternative choices 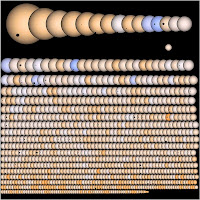 No, this is not an Eye-Chart designed by a super devious eye doctor. It's actually a visualization of the 1,235 candidate planets discovered by the Kepler telescope during it's first 4 months of observation. The big round orbs in the picture are scaled representations of the star, while the little black dots represent the planet(s) of interest. Of those planets discovered, there are 5 that appear to be in the appropriate temperature range and a "habitable zone" to sustain life as we understand it. In NASA's press release, they include a white paper describing the work in detail. As an aside, you really have to wonder how much they were sweating after finding 1,234 planets... because who would have believed that? There must have been a collective sigh of relief after coming across that very last one.

Even though I'm a month and a few days late with this news, keep in mind there's still plenty of time to pick out your favorite one before the world ends next march. I've got dibs on number 527.