After nearly three years of development, the release of gnome three is official. Say goodbye to the days of the old boring gnome, and say hello to the new exciting 3.0.

Representing a drastic departure from 2.X, Gnome 3 brings a lot of new features including a redesigned upper panel, a new menu-system, task management based on 'activities' and more. While the new design may put off a lot of loyal Gnome users (including myself), there does appear to be some potential.

Hopefully over lunch I'll get a chance to Install Gnome 3 and provide instructions, some screenshots, and a quick GBO review.

For installing Gnome3 in Ubuntu 10.10, I found it works fine to follow the instructions posted here (along with installing libusb-1.0-0-dev). But, as I describe below, installing this in a virtual machine is fairly non-functional. It may be best to wait for your distribution to package it before you do a full install to your system even though from my VM, it doesn't look like the new dependencies required have damaged anything else. Now on to the review! 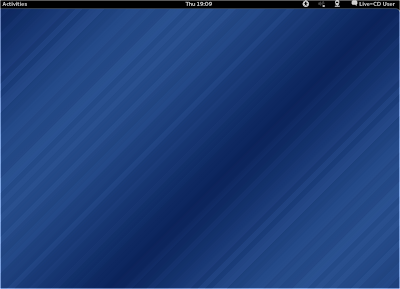 On booting, you're greeted with minimal fuss. A simple panel drapes across the top screen providing you with time, date, some notification icons and an "activity" button over in the top left. 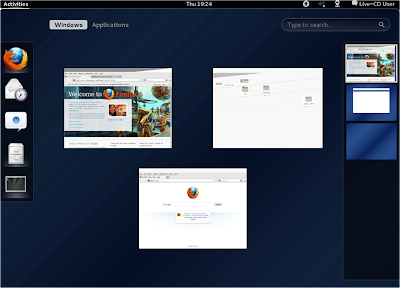 Moving your mouse cursor to the "activities" button brings up the highlight of Gnome3. A handy place to manage windows, workspaces, and menus. By default, you are first brought to the windows tab. At the far left is a dock that can hold and launch specified programs. Open instances of programs not on the dock will be automagically added and stay put until the window is closed. If one instance of a program is open, clicking on its icon in the dock will switch to that program. Right clicking an icon on the dock will bring up a context window with the ability to select between multiple instances of the program if several are open and a few other options. While you can switch between windows using the dock, you can also just switch by clicking the thumbnail of the window in the center screen. At the far right of the windows tab is the workspace switcher. There are two workspaces by default, and more are added as you fill empty ones with programs. The multiple workspaces provides a useful way to organize your applications and streamline your workflow. 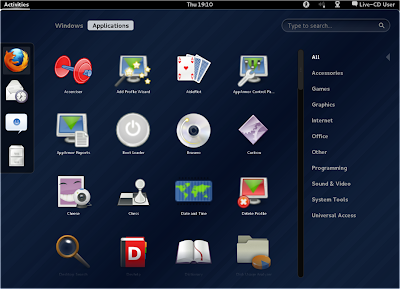 The applications tab, accessed via the Activities item and clicking "applications", is dead simple. Categories are listed on the far right, and large selectable icons hang in the center of the console. Scrolling with your mouse or arrow keys quickly navigates through the different menu categories. 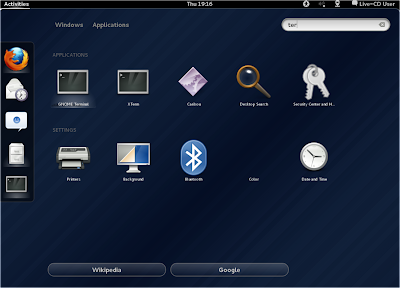 Another handy feature of the Applications screen is the search bar in the top right. Typing a search term automatically populates the screen with the most relevant programs and settings as you type. As an added bonus, you can quickly launch your search on the web via google or wikipedia (buttons located bottom center).

The Good: Gnome 3 is clean, pretty, and probably more intuitive for new users. The left side dock is fairly sleek (much more so than with ubuntu's "unity" interface) and easy to use, with an iterface that should be familiar to Windows 7 users. Unlike the days of old, navigating through menu options no longer involves hunting through an awkwardly structured tree menu trying to figure out where everything is at. Perhaps taking design cues from current mobile platforms like iOS and Windows 7, menu options are logically grouped and displayed all at once. Even better, you can search for what you want and see items from menus and programs pop up into your application screen. Web integration for google and wikipedia are also accessible during a search to quickly launch your search on the web.

The Bad: Window and "activity" management is a bit annoying, as you constantly have to navigate up to the left top corner of your screen (or else fall on the "super" key) to switch between programs and launch new ones. It can honestly make a fellow a bit sea-sick. Also, much like docky (with gnome-do), there is no preview on mouse hover when multiple instances of a program are open, requiring that you right click to select the window you want or else hunt for it among open window thumbnails. Finally, although this may just be due to the limited time I have spent with the desktop environment, there really did not appear to be many options available for customization. Personalization of linux environments is ranked as pretty important among many if not most users, and the lack of it in Gnome 3 could be quite a put off. Also, Gnome 3 looks to be more of a resource hog than it's predecessors, making it difficult to run on older hardware.

The Ugly: Gnome 3 requires a full 3d accelerated environment. This brought my virtual machine (VM) to a screeching halt and required booting from a live-gnome CD to test the system out for a workable user experience. The need for full 3d composting is likely to cause a lot of problems down the road for new installations as 3D acceleration on NVidia and ATI graphics cards are notorious for causing problems with Linux owing to the proprietary nature of their drivers. As a final note, there does not seem to be any way to have "unmaximized" windows, making it dificult to quickly switch back and forth between two projects or even view two things as once.

Want to try gnome three out? Follow the instructions linked above for Ubuntu, or try it out on any computer (without changing a thing on your hard drive) by downloading and burning the live iso to CD here.
Linux Technology