The Village Pheasants are Revolting

May 23, 2011
Our home is under attack. No, not by marauding Vikings. The 32 stickers indicating our home is protected by an alarm system and "instant death" have seen to it that they stay away. Instead, we have our very own cardinal. Meet Mr. Cardinal:

Mr. Cardinal first made his presence known by rapping on the window pane while The Candid Counselor was hard at work. Initially, this development was thrilling. There may even have been exclamations of "How cute!", "Lookit him ruffle his feathers!", and "Awww... he thinks we're playing a game of Peck-a-Boo!"

Several thousand pecks, a life-time's supply of Asprin, and multiple return visits later; he was not quite so cute. We began to notice the little mannerisms - how he would center himself in the window and flap at us when we came closer to inspect and shoo him away. We watched in awe as his little head bobbed back and forth and twisted side-to-side, glaring at us with one beady eye or the other. A simple truth slowly dawned.

He wants to eat our souls. And our little dog's too. 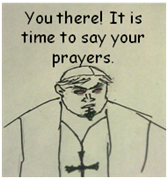 Now, when I moved into my office at work, there was a contraption left behind. After inquiry, it was determined the intention of this contraption was to deter birds from perching along the roof of our building. It looked something like this: A plan began churning. Several puncture wounds, a trip to the doctor's, and one tetanus shot later, the bird deterrent was brought home and placed outside on our window sill. We sat back in satisfaction and waited. Any normal creature would surely be scared away. But Mr. Cardinal? In response, he has demonstrated a high aptitude for humming-bird-like agility while flapping mid window and pecking away.

Considering it may be best to find a coping mechanism, I have decided to imagine this little bird is up there telling his idea of hilarious jokes.

Editor's note: The above may also be how it sounds when a grown man is strangling a little bird's half-inch-wide neck. Just saying -

True, it's entirely possible this little bird is just confused. Maybe he saw our delicious dinner one evening and thinks he's a swallow; thus deserving a bite... Or maybe he's lonely and thought the 'chick peas' looked hot... I only know for sure that he has left me in a fowl mood. What I can do is guarantee you this - if he keeps it up - he will soon be a poultrygeist.