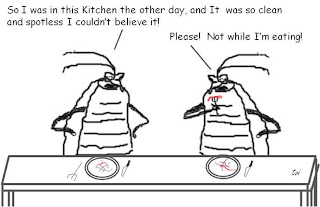 The Village Idiot is back to discuss and hopefully shed some light on a particularly odd phenomenon associated with the common holly-freaking-cow-that's-huge cockroach. But first, I would like to dispel what appears to be a popular misconception. Roaches do not have ears. I am convinced that many of you think otherwise judging by the shrill, piercing scream you emit that makes neighbors think you have just lopped off your toe.

No matter what you may think, simply trying to scare the diddley-filth out of the cockroach in hopes that he will flee back to Congress a very dark place actually has little effect on said roach. Sure, he may stop to take the previously-mentioned diddley-filth, then smoke a cigarette... But after that he will carry on with business as usual.

At best, the sonic vibrations from your scream will cause the poor fella to think there is an earthquake, panic, and run for the first safe place he can find. This will likely be up your pant leg, which leads to a situation where you have your neighbors coming over to help reattach your toe, and they find you laying face-up on the floor, flailing your leg, stripping off your pants, and muttering profanities. If at this point you are considered to be either, (a) one of 'those' people, or (b) having a seizure, you have only yourself to blame.

In truth, cockroaches are rather timid little creatures and always do their best to accommodate you. If you don't believe me, consider how they scurry to get out of your way when you open a door or flip on a light. Consider their frantic nature as they scuttle around, hurrying to get off you when accidentally dropping from the ceiling. Clearly, they wish you no real harm.

For the most part, roaches are a lot like men; they hang around the kitchen looking for food - or in the bathroom doing who knows what- and only scatter when the housework begins.

However, the one aspect that is contradictory to their general good will (cockroaches, not men) is that they seem to have an overwhelming compulsion to crawl out into the middle of the kitchen floor to die. You see, doing this is unnatural. Cats, for instance, will crawl to the deepest, darkest part of the underside of your house to die in the moist, solitary darkness. In fact, any attempt to remove a not-yet-dead but dying cat from the confines of their "resting place" will progress about as pleasantly as a woman giving birth to an elephant.

If you don't believe me, try it. After you retrieve your fingers from their Wolverine-sharpened claws and accept that you will never use that hand again, don't say I didn't warn you.

There must be some reason, then, that a holly-mother-of-crazies-I-didn't-know-they-could-be-that-big cockroach chooses to die in the open. And the reason is quite simply arrived at by pushing our "roaches are like men" analogy a bit further.

Like men, they simply get a kick out of grossing you out. Now pull my finger!