July 07, 2011
On July 4th, Americans everywhere remember what is important in this country. That is, of course, the freedom to pay 5 dollars for a cup of burned coffee. Never mind that the coffee is sold to us from a company that was so sure we'd make them rich they figured their bucks would reach to the stars... what really matters is that we are not drinking tea.

See, the British were once horribly odd folks that liked to put milk in their tea. Apparently no one ever told them this was gross. Tea without milk was not an option for the poor colonies. Adding insult to injury, King George W. Bush insisted the 'Mericans smear Imperial Margerine(TM) on their English Muffins and even began putting thumb-tacks in the tea. As time passed, people got fed up (probably sometime after the middle ages when famine was less prevalent). A group of individuals emerged that decided they'd had enough and were going to do something. No one knows for sure who they were, but at least 4 of them were fathers... Anyway, one night they got together, dumped all the tea out into the ocean, and had a party. This apparently started the civil war between the French and the Indians, which ultimately lead to Custard's last stand-up comedy routine that bombed so bad Bill Cosby was given the Jello Pudding-Pop comercials...

I can't believe it's not better...
Ok, I might have gotten some of those details mixed up, but there is a very good reason. Just recently we had the pleasure of experiencing the Fourth of July like Texans. This included spending about 5 minutes outside, then trucking it in to watch fireworks on the local news because, even at 10 PM, it was still 108 degrees F outside. Try to imagine the pleasure of recovering from heat stroke while being delighted by seizure-inducing flashes of light on your television screen - and you will begin to see why I was tempted to title this post "108 ways to get a headache"...

But Americans were not the only ones celebrating this weekend. Nope. Our very dear friends from Canada also had their very own day (I have it on good authority that Canadians do not consider themselves "Americans")*. Delighted to learn that our holiday weekend was shared with our northern neighbours, I set off to search ye olde archives for past lessons learned about the lovely nation of Canada that just might surprise you (i.e., I read an old friend's blog and looked at some pictures I took when I visited Niagara falls once). In no particular order:

1. Canadians do not travel by dogsled; unless you count that one drunk guy holding a dog leash in one hand while sitting on a trash can lid.

2. Every one there does not know my third cousin John living in Simcoe.

3. Houses are still used as general places of habitation rather than igloos.

4. Their currency is based on monopoly money. 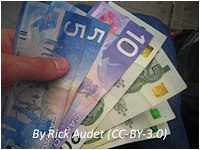 5. A loonie is what they call a dollar rather than a relative.

6. The marijuana leaf was a close runner up as the national symbol.

7. Their baseball team could use some help, but they blame the US for its problems.

8. They blame the US for most other problems too.

10. A paper cup of coffee is the real national symbol of Canada.
Fun Monday Mumbles

Evolution and the Technological Revolution

In the mid 1800’s, Charles Darwin invented natural selection. This was a process that allowed natural stuff to kill off those less adaptable to their environment. By less adaptable, of course, we mean dumb. Later in the next century, and to compensate for the impending doom of the human species, Al Gore invented technology.  Technology’s purpose was initially to make it easier to order a pizza, but quickly became the most popular means available that allowed humans (that were slowly evolving into monkeys) to survive in today’s society. Consider a recent evolution of technology: the self check-out line. Understand that there was nothing wrong with the original checkout process, in which a pretty blond-headed girl named Cynthia swiped my items past a scanner, and then told me how much money to give her. A nice young man then places these items in a bag, gives me a dirty look because I don't want him to carry them out, and then allows me to go on my way. There are some, however,
Read more