Angels and Strange B Mesons: The Title of Dan Brown's Next Book? 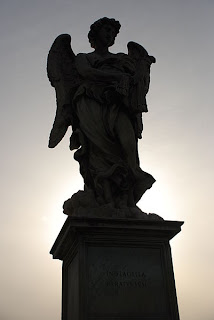 Through further analysis of data collected on the Large Hadron Collider (LHC) last fall at CERN, a group of scientists are beginning to study a collection of tiny subatomic particles called mesons. In particular, they are finding different rates of decay for the matter particles (called Strange B) when compared to the antimatter particles (called B-bar). Since it is believed mesons were around after the big bang, this group suggests these studies will illuminate the reasons our universe is composed predominantly of matter. That is, after they can provide some evidence that there actually was a big bang.

You can go here to read the press release, or just wait for Robert Langdon to explain it during his next adventure.
Science Technology